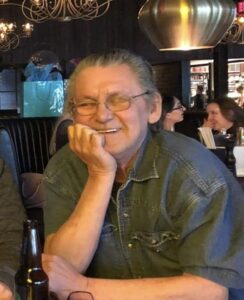 With heavy hearts we announce the unexpected passing of Fernand Alfred Durocher on June 30th, 2022 at the age of 63 years.

Fern grew up in Geraldton, Ontario, CA where he attended Geraldton highschool. He enjoyed scouts, air cadets, and dreamed of joining the military one day. In Fern’s adult years he started highway construction. He was a hard worker and very proud of his work that he had done. Fern enjoyed music, playing his guitars and singing. He also enjoyed cooking. Fern may have had some struggles, but lived life to the fullest, always gifting others with his warm smile. He would do anything for his family and friends, and he loved fiercely. He made everyone who knew him laugh, cry, and clap at all the stories he shared.

Our family is grateful to know that Fernie is finally at peace.

A Celebration of his life will be held on August 13th, 2022 at 6021 35a avenue at 3pm-7pm. Then we will proceed to Hillview pub for karaoke. RSVP with Robert Durocher.