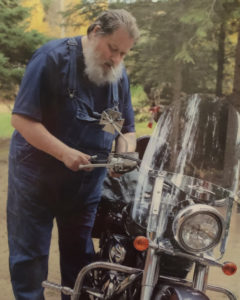 It is with heavy hearts that the family of Michael “Mike” Verigan announce that on May 14, 2020 surrounded by his wife, Ivy, daughter, Monica, and daughter-in-law, Loreen; he passed away eight days short of his 72 birthday. Mike will always be remembered by his wife of 35 years, Ivy; two daughters, Alishkea and Monica; four grandchildren, Julia, Devon, Alexander and Vincenco; three great grandchildren, Irinna, Nikolai, and Avelina; six step-children, Cindy (Glenn), Dody (Rod), Fred (Loreen), Marie, Trevor (Heather) and Bunker (Naomi); as well as numerous step grandchildren and step great grandchildren. He is also survived by his brothers, William, John, and Dave; sisters, Lori and Faye; and half sister, Marilyn. Predeceased by his parents, John and Mabel; step-father, Ralph Sodigran; half brother, Keith. Mike was full of life and will always be remembered for his quick wit, joking manner, and sense of adventure. Get on your bike and Ride on Mike, Ride on!! A special thank you to the staff at the Westlock Continuing Care Centre and Dr. Mydeen for their exceptional care of Mike. Keeping with Mike’s wishes, cremation has taken place and no formal service will be held. A Private Family Celebration will be held at a later date.