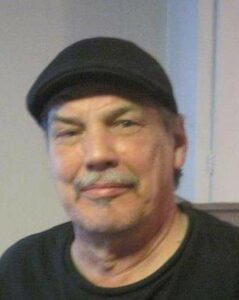 While enroute to Edmonton to see family Patrick was involved in a tragic highway accident in Jasper Park. He was taken to Hinton hospital where he succumbed to his injuries.

Born and raised in Calgary, Patrick lived in Vancouver and Yellowknife before settling in Edmonton. He had made some personal changes 40 years ago that enabled him to have his children in his life. He was a single Dad to Derek and Sharon for a number  of years. His final move was 23 years ago to Vancouver where he enjoyed his life on Commercial  Drive with his brother Tom and close friends.

He is survived by his daughter, Sharon; stepsons, JJ and Aaron; brothers, Bob, Dan, and Tom (Ali); sisters, Debbie (Reg) and Donna; and many nieces and nephews. Predeceased by his son, Derek; and brothers, Jim and Dave.

Patrick remained faithful to his Calgary roots and was loyal Stampeders fan. He was affectionately known as “Cowboy” to friends and family.

Patrick led a varied and colorful life, at the time of his death he was in his words “a man of leisure ” who had been able to realize a dream of visiting all Canadian provinces and traveling extensively internationally. His friends and family enjoyed seeing pictures from his “bucket list” trips.

Patrick always seemed to be on some sort of journey and now he’s made his final one. He will forever be missed by those who loved him, he left us memories and some great stories.